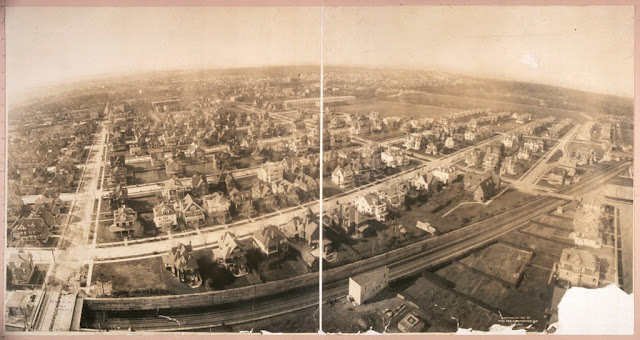 We recently designed the renovation of a house in an area of Brooklyn known as Prospect Park South, designated a Historic District by the New York City Landmarks Preservation Commission (LPC) in 1979.  This area was first developed by Dean Alvord who acquired the land in 1899.  Alvord wanted to create a rural park within the city’s street and block system. To achieve this, he hired John Aitkin a Scottish landscape gardener who planted trees at the building line instead of the curb line to make the streets look wider. 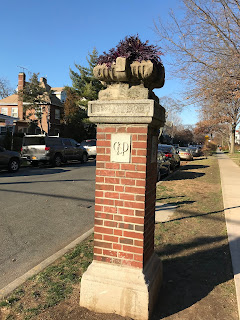 Aitkin separated the sidewalks from the streets by using a landscaped eight-foot strip; prohibited fences and allowed hedges only behind the building line to screen the backyard. The houses were placed in the middle of the landscaped lot to stress the “house in the garden” quality of the development. They were built for people who worked in the city but wished to live in the country. 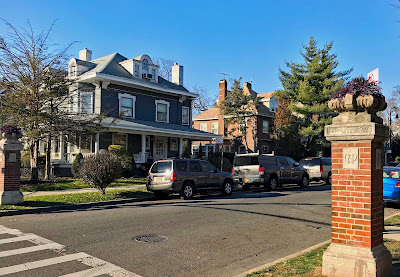 The houses of Prospect Park South exhibit a wide stylistic variety. Having said this, there are enough houses with clapboard and shingle facades making the use of these materials a unifying feature. Most houses employ some interpretation of a typical Colonial Revival style; they tend to use projecting bays, oriels, deep eaves, brackets, stained glass and Palladian window motifs. 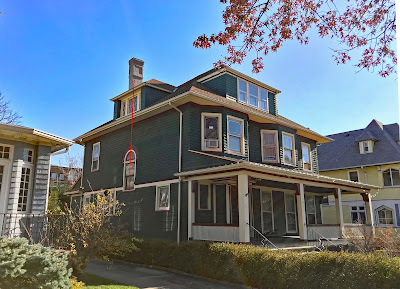 The chief architect of Prospect Park South was John Petit who also designed our client’s house, in 1901. Here’s a quote from the LPC’s designation report:
“ Petit was undoubtedly familiar with the architectural publications of his time, particularly with Architecture and Building, a magazine that published articles on Prospect Park South, as well as a number of separate designs by Petit.  In his designs Petit incorporated stylistic details found in published architectural drawings and photographs.  Although he borrowed many stylistic ideas from these sources, all of his best works show a sophisticated design sense that is lacking in the works of less skilled revival architects.” 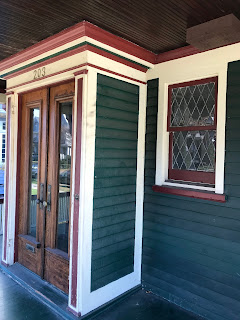 The picture above illustrates slenderized pilasters holding up a full entablature over a projecting entrance bay. The leaded glass windows seem to be original to the house.
Working under the scrutiny of the LPC, our idea was to transform the house with all the modern conveniences of double glazed windows, water saving plumbing fixtures, energy saving light fixtures, and a 21 st century kitchen in an elegant way that harmonizes with Petit’s original design. At the end of the day one would look at our design and think that this was Petit’s design. We measured all the interior walls and features of every room on every floor and all the exterior elevations as accurately as possible. The information gained was used as a basis for the design details of the house renovation on the interior as well the exterior.
The existing kitchen is very dark since it only gets north light from two small windows. It's existing eat-in area ended up in a left over space between the kitchen and the dining room and is dark and cavernous. 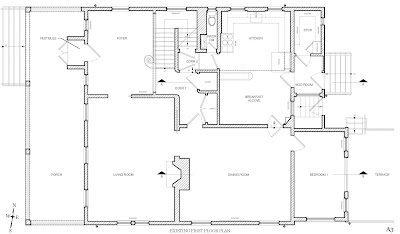 The client requested a new eat-in-kitchen oriented towards the back garden and an enclosed back porch that would restore the original connection between the back garden (“house in the garden” idea) and the dining room. 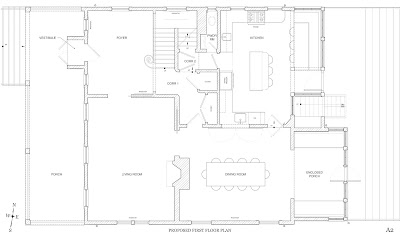 The new plan layout centers the kitchen around an island that can also accommodate seating for a quick snack; a built-in banquette comfortably sits 6 persons in the new breakfast nook.  The cooking area of the kitchen is on the north half and has its own small salad sink. The dishwashing area is on the south half and has a big sink and dishwasher. The dining room opens to the enclosed porch which in turn opens to the back terraced steps into the backyard. The new kitchen will connect with the existing dining room, not only through the existing door but also, via a new pass-through centered on the two existing dining room doors.

Note the “pass-through” doors open the dining room to the kitchen for ease of serving and for a visual connection when opened. 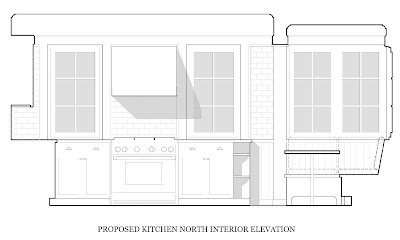 The new stove is centered on the island and in-between the two existing windows. The window casings dovetail into the wood trim system above. The new refrigerator is paired with the kitchen entrance from the front of the house.  Both are centered on the island which will have a beautiful hanging double light fixture combined with a pot rack to visually unify the room. Note the wood trim system at the top of the cabinets, windows, and doors which also serves to unify the room. 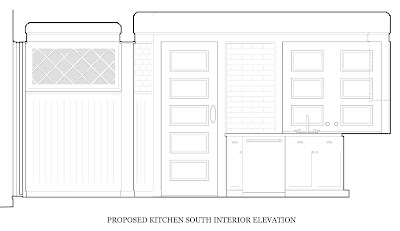 The double pass-through doors will open unto the dining room for ease of serving dishes as well as collecting them directly into the dishwashing area.

The breakfast banquette faces the back garden and is bathed in abundant east light which is perfect for a breakfast area. 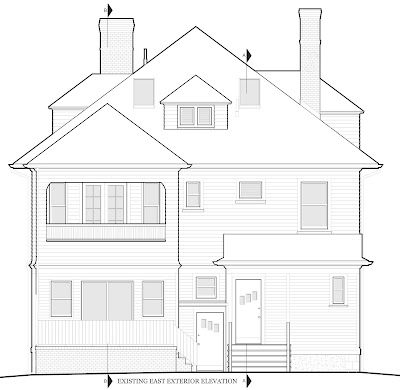 The New York City Landmarks Preservation Commission (LPC) reviews the design changes to all the façades before approving any project. So, a “case” must be carefully constructed around precedent in addition to the Owner’s needs. We were extremely lucky in that the clients found a historic photo showing the original back of the house. This pointed in the direction of a “post and lintel” system which is how we designed the new porch and kitchen windows facing the backyard. 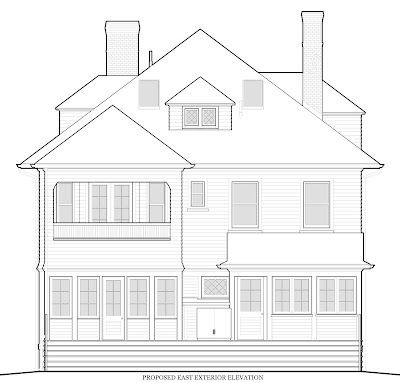 The new window systems infill in-between this post and lintel system thereby unifying the back façade and making it more cohesive. They will bring a lot more light from the east, which is optimal for breakfast rooms.
Many owners dislike the LPC because they find their requirements too onerous. Yet, LPC’s involvement helps to keep the property values up by keeping the design integrity of the original neighborhood.
When renovating a house in a historic district there are 5 principles to keep in mind:
1-     It is possible to upgrade your house to 21st century standards while keeping the look of the original design.
2-     First things first (part A) - Do not let a favorite design image clipped from a magazine or a website get in the way of an organized plan with a well thought out circulation pattern.
3-     First things first (part B) – The most expensive rooms to renovate are the kitchen and the bathrooms so it is very important to plan them well and get them right.
4-     Let the architecture and the interior moldings of the original house point the way to what the “look” should be.  The result will be a harmonious design.
5-     Look for old photos of the house or historic precedents in the neighborhood to support your argument with the historic governing agency.


Posted by Designs for Better Living at 1:22 PM