Architecture is a “language”, it communicates ideas such as civic hierarchy, building type, character, use, size, order, entrance, passage, etc. Traditional architecture is shaped by its moldings; they can make a building look robust or delicate, honorific or utilitarian, inviting or intimidating, homey or solemn. Moldings are those carved or applied pieces of ornament that enrich a building’s exteriors or interiors and are usually made of stone (on the exterior) or wood (on the interior).  They are the “letters” that make up architectural words and “explain” the idea of a building or it’s interior. To be able to “read” these “letters” or moldings is one of the joys of experiencing traditional architecture.


Moldings derive from the architectural orders which were codified during the Renaissance as: Tuscan, Doric, Ionic, Corinthian, and Composite.


The orders serve to organize or “order” the supporting (columns) and supported (entablatures) structural elements of a building. This ordering is given by the disposition of their component parts (moldings), their character, and proportion. Thus, Tuscan and Doric orders are associated with masculinity, the military, earth and strength. The Ionic, Corinthian, and Composite orders are associated with femininity, lightness, rebirth and transcendence. There are many variations of these five basic orders as each successive generation has expanded, altered, or modified and adapted them to their time and circumstance.
While the orders have a base, a middle, and a top all the different moldings that in turn, make up the base, middle and top also have their own tri-partite system and the same repeats for the sub-pieces within them. For example: columns have a base, a middle (shaft) and a top (capital). The base in turn is composed of a plinth, a torus, and a cincture; the capital, of the necking, echinus, and abacus. Entablatures have an architrave, a frieze, and a cornice. Cornices in turn have a bed molding, a corona, and a cymatium…and so on and so forth. 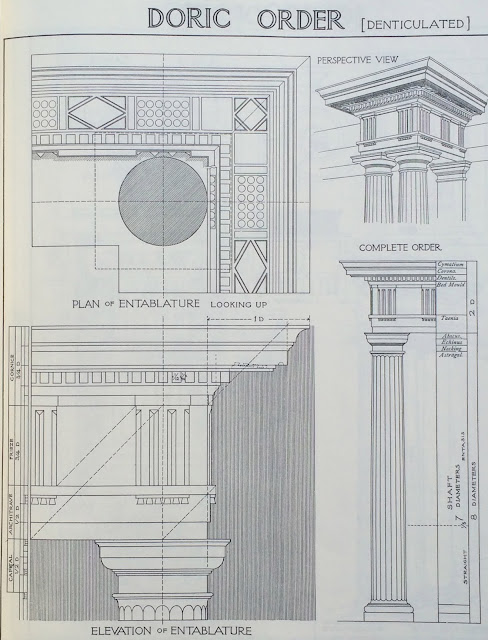 All these sub-pieces are made with concave, convex, flat, or compound shaped pieces that are what we know as moldings. Their shapes have been codified for the past 2,000 years by their geometrical forms. So, the concave moldings are called: cavetto and scotia; the convex moldings are the ovolo and the torus; the flat moldings are the fascia and the fillet; and the compound moldings are the cyma recta, the cyma reversa, and the beak (see the chart below). 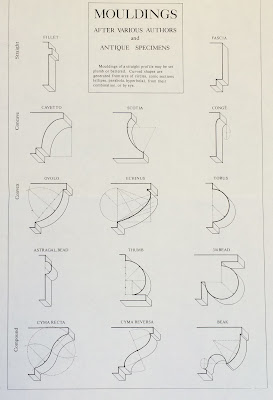 Sir William Chambers classified moldings according to how they express their role or relative position in the orders. There are some that support such as the ovolo or the echinus (which are found in the column capital); those that crown the building such as the cavetto or the cyma recta (found in the cornice); those that bind such as the torus or the bead (found in the column base) and those that separate such as the scotia, the conge or the beak. Chambers talks about their expressive qualities to show the effect of gravity on the structure. John Wellborn Root (of Burnham and Root) took this idea to an ultimate expressive form in the Society for Savings Bank in Cleveland. Here the toruses at the bottom of the columns look as if they are being squeezed, by the enormous weight of the building on top, and the column capitals look like they are supporting this weight by substituting the typical echinus of the column capital with rough-hewn stones. The column shafts are exaggeratedly shortened thus emphasizing the tremendous weight above.


When used in interiors, moldings are sometimes modified in size by making them slender in proportion, as in the interior of Gunston Hall in Virginia (1755-59). Sometimes moldings are omitted from their customary place in a typical entablature. In Syon House, Middlesex, England (1760s), Robert Adam omitted the architrave as the entablature overlaps the wall.  By doing that he signaled that the wall is actually doing the supporting and the frieze becomes more decorative; this is an appropriate function for the frieze in an interior. In a similar move, Gunston Hall, virtually eliminates the architrave as well.


The room pictured above is in a house called Wilton in Richmond, Virginia (1753). It is a good example of American Georgian. The proportions of Georgian rooms tend to be less delicate than those of Federal rooms such as the one pictured below in a house called Edgewater in Barrytown, New York (c.1820).

So other than general historical scholarship why is any of this relevant to the 21st century? The fact is that houses are still being built following traditional paradigms because people like to live in places that are familiar, that help them to recall where they came from, and that are responsive to the climate and culture that they are built in. Most new houses in the US are built in what is generally considered a traditional “style”. The problem with many newly built houses is that too many architects and builders seem to have forgotten how to design using a traditional language and simply resort to making them “look” traditional instead of following the tradition with knowledge. My hope is that the general guidelines given here contribute to elevate the conversation about traditional architecture and help to illustrate that while traditional moldings follow a conventional and codified system of rules, these should be carefully calibrated to the circumstances, character, use, and hierarchy of rooms in a particular house and for a particular building type. In this way the use of the classical language of architectural moldings can be expressive for our present times.

Posted by Designs for Better Living at 9:33 AM